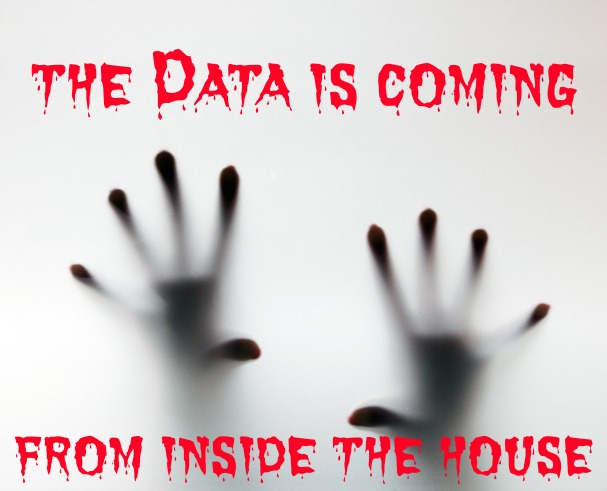 These real-life scares remind us of the dangers of data loss (and how cloud backup can help!)

A spilled glass, a natural disaster, malware. What do these things have in common? They can all lead to data loss. Last year we shared real-life horror stories about data loss and it’s that time of year again to share more scary stories about what can happen if you don’t protect your data. Your data can be protected in more than one way: important and meaningful files and media can be secured against loss via cloud backup while your personal information can be safeguarded from prying eyes with privacy shield apps- either one of these could’ve saved the following people from data damnation.

Wanting to prove herself, Siobhan was early to her internship and always the last to leave. While staying late one night she thought she’d help organize a backlog of files that had been left untouched for months. As she sifted through copies of files on the company’s servers, she noticed what she thought to be duplicate files taking up extra space on the drives. With each deleted file, though, Siobhan was costing the company where she interned. The next morning her work was greeted with dismay by her supervisor. The duplicate files she thought she was helping to get rid of were actually archives of old client files the company legally had to keep on hand. Siobhan wasn’t offered a full-time position.

The only thing William loved more than photography is his puppy, Max. Like all puppies do, Max requires a ton of attention and has lots of energy. One day at home while editing photos from his latest shoot, Max jumped on his lap excitedly, knocking over the items in front of William on the table. As if it were happening in slow motion but he was unable to react, William watched as the content of his freshly brewed cup of coffee spilled all over his laptop. With a snap, crackle and pop, his work was gone. Luckily for William, he still had the original files on the camera’s SD cards. Unluckily for him, he had to redo all of the editing he finished…as Max whimpered from his cage in time out.

Dylan had finally found the perfect car, and after working hard for years was finally able to take it home. He relished in what he thought would be his last Uber ride ever on the way to the dealership. The color and price was perfect, all he had left to do was sign. Just then, the salesman returned with a worried look. To Dylan’s surprise, he wasn’t approved for the loan. When Dylan talked to the creditor, the issue became all too clear. Accounts upon accounts had been opened using Dylan’s personal information. After making a police report, he went home and signed online only to receive a worrisome email. His favorite messageboard had been the victim of a hack, and information entered on the website forms had been stolen by malicious actors. Defeated, Dylan Ubered to work the next day.

A Trip To Nowhere

Moira loved traveling, but being stuck at home all year because of the pandemic was starting to get her down. To cheer herself up, Moira planned to have a virtual trip around with her friends, each of them sharing photos and stories from their previous trips via video chat. Excited to take her friends on a pictorial trip of Hoi An, Vietnam, she plugged in her external harddrive. A couple of spins of the disc, a beep boop of effort and lots of blinking lights later, Moira’s system failed to recognize her harddrive. She tried again and again and after no success, she ended up at a computer repair shop and a couple thousand dollars later was able to take home her treasured photos after the shop restored them from the corrupted drive.

If you learn anything from these stories, let it be this: data loss sucks. Fortunately, there’s preventative measures you can take to make sure you don’t suffer the same fate as these poor, data starved souls. With 256 AES end-to-end encryption, Polarbackup cloud backup safely secures your data on the cloud aware from trigger-happy interns, energetic puppies, or whatever corrupts a physical hard drive. Polarprivacy Shield is just as helpful for people like Dylan. With malware scanners, log-in encryption, VPN and dark web scanners, Polarprivacy Shield keeps your identifying personal data away from prying eyes online.    Check out how Polarbackup can save all of your data and protect it from loss by visiting www.polarbackup.com